The Challenge is to design and build a robot competent to fight other robots in Battle. The competition is carried out in a tournament format in which the competitors bring their wireless robots ready to battle and are pitted against their competitor’s robots in a one-one match where the aim is to cause maximum damage or to push the opponent’s robot off the arena to score maximum points. The team scoring the maximum points wins the championship. The challenge has two participation categories as per the gross weight of the Robot.

How to Get on BotsCombat

A match is played One-on-One. Refer to the rules in Rulebook.

The team must build and bring one pre-constructed, autonomous, or manual, a wireless robot whose purpose is to push, throw, flip, hit, drag, or otherwise move the opponent out of the battle ring within the maximum battle time. The following section details the rules and specifications regarding the robot; please be sure to read them carefully and refer to them as you design your robot.

The participating bots can be wireless must be controlled remotely. A bot must fit inside 100 centimeters wide and 100 centimeters high cube at the beginning of a Battle. There are no size constraints once the Battle has begun, the robot can expand its parts after the battle starts. Additionally, nothing can intentionally detach from the robot. Robots will not be immediately penalized if pieces detach as a result of breakage. In the case of repeated breakage, the Referee may invalidate a Battle, request certain remedies be taken, or disqualify the Team.

There are two categories in the competition. Weight norms for both categories would be as follows:

Weight will be measured at the time of inspection before starting the competition.

Weight Exclusions: Safety cover, restraints, small cameras or telemetry package installed into the bot do not count towards the weight of the bot.

Additional Decoration Weight: Bots can have an additional decoration that increases the bots’ weight over the defined limit, subject to the following.

The BattleBox is a fully enclosed 40-feet by 40-feet rectangle raised 1 feet off the ground. The BattleBox floor is approximately level but is not guaranteed to be flat or smooth. The BattleBox employs certain “Hazards” and other obstacles that can block, damage, and/or disable a Bot. The BattleBox may also contain debris and/or have damage from previous Matches. Competitors are encouraged to use the Hazards and obstacles to their advantage. However, TechnoXian. is not responsible for any Bot damage caused by the BattleBox itself, the Hazards, or debris within the BattleBox. 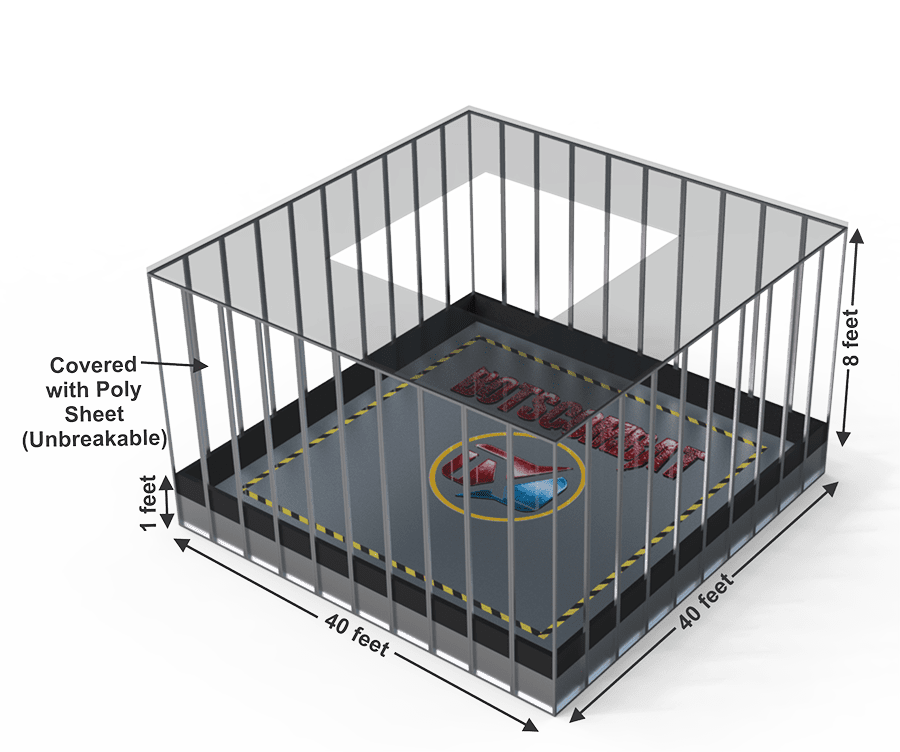 At the conclusion of each One-on-One Match, the winner will be decided by the following criteria:

Forfeit Due to Rules Violation: If Referee believes that one Team’s Bot was violating a Tournament Rule, they will inform TechnoXian officials, who may then declare the opposing Team the winner by Forfeit. The Forfeit can be declared either during or immediately following the Match.

Knock-Out Due To Engagement Avoidance: If a Referee believes that an Operator is deliberately avoiding the engagement of their Bot with the opponent Bot, the Referee will notify that Operator that their Robot must make physical contact with, or otherwise engage the opponent Bot. If the Operator does not attempt to comply, the Referee may declare that the Operator’s Team has lost due to a Knock-Out.

Single Incapacitation Knock-Out: During a Match, a Bot must at any time be able to demonstrate that it is Responsive. This is confirmed as follows:

If one Team’s Robot becomes Incapacitated, then the opponent Team will be declared the winner. The win will be considered a KnockOut. The Referees’ decision in regards to when an Incapacitated Bot is deemed Knocked Out shall be final and not subject to challenge or appeal.

Non-Responsive Count Termination: Referees have the option of terminating a count early if both Referees agree that a Bot or Multi-Bot is non-Responsive and obviously will not recover.

lying Bot Incapacitation: A Flyboy will be considered Incapacitated when it can no longer fly or move along the Arena floor in a controlled fashion.

Multiple Knock-Out: If both Bots become disabled, and it’s not obvious which Bot became disabled last, the decision may be put to the Referee. However, TechnoXian officials have the option to declare that both (or all) Bots in the match have lost due to a Knock-Out.

Referee’s Determination of Match Winner: Certain criteria and methods are used by the Referee to decide a Match winner in the event a winner is not determined during the course of a Match (i.e., neither Robot is Incapacitated, Knocked Out, Disqualified, etc. during the duration of the Match).

Judging Criteria: The judging criteria uses three factors, each of which is assigned a point value, as follows:

Through deliberate action, a Bot either directly, or indirectly using the Arena Hazards, reduces the functionality, effectiveness, or defensibility of an opponent. Damage is not considered relevant if a Bot inadvertently harms itself. Also, if a pressure vessel or a rapidly spinning device on a Bot fragment, any damage to an opponent will not be considered “deliberate”.

Aggression is judged by the frequency, severity, boldness, and effectiveness of attacks deliberately initiated by a Bot against its opponent. If a Bot appears to have accidentally attacked an opponent, that act will not be considered Aggression. Consideration is also given if the attacking Bot is risking serious damage on each attack. Continuous ramming attacks using a wedge or other passive armor and without using a powered weapon can reduce a Bot’s comparative Aggression score.

Control means a Bot is able to attack an opponent at its weakest point, use its weapons in the most effective way, avoid Arena Hazards, and minimize the damage caused by the opponent or its weapons.

For more details, refer to Rulebook