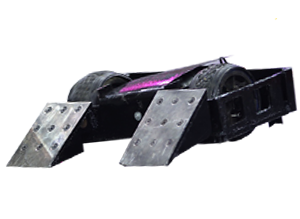 The Challenge is to design and build a robot competent to fight other robots in the Battle. The competition is carried out in a tournament format in which the competitors bring their wireless robots ready to battle and are pitted against their competitor’s robots in one-one matches where the aim is to cause maximum damage or to push the opponent’s robot off the arena to score maximum points. Team scoring the maximum points wins the championship. The challenge has two participation categories as per the gross weight of the Robot.

The team must build and bring one pre-constructed, autonomous or manual, wireless or wired robot whose purpose is to push, throw, flip, hit, drag or otherwise move the opponent out of the battle ring within the maximum battle time. The following section details the rules and specifications regarding the robot; please be sure to read them carefully and refer to them as you design your robot. The robot should not be of jumping and hopping type

Radio control requirements:
Radio systems MUST NOT cause interference to other frequency users. In RoboWars, only the 2.4ghz DSS (Digital Spread Spectrum) frequencies are allowed. Radio telemetry is permitted on 433MHz and 2.4GHz.

Electrical Power:
The robot must be powered electrically only. Use of an IC engine in any form is not allowed. All robots must incorporate a way that can be activated to remove/turning off power to all the weapon system and drive systems without causing harm to the human activating it. Voltage must not exceed 36V DC. Note that batteries may have a higher voltage during charging and care must be taken not to exceed these limits. Change of battery will not be allowed during the match however he can change the battery in between matches.

WEAPONS:All high-speed weapons (e.g. all pneumatic/hydraulic/spring/flysheet and rotational weapons) must incorporate a secure restraint that holds the weapon in a safe position. The restraint may incorporate locking pins and bars but must be secured in such a way that it cannot be removed inadvertently. The design should ensure that the weapon must remain off in ideal conditions and functions only when activated by the controller.

Battle time is the Maximum time allotted for the robots to fight and be in the arena. Battle time does not stop ideally, however can be stopped by the referee under critical circumstances.

In each round team scoring maximum points will be qualified to play the next round.

Compliance with all event rules is mandatory. It is expected that competitors stay within the rules and procedures of their own accord and do not require constant policing.

Team
A team consists of two to five members. Each team must have a captain. The captain is the person responsible for communication with referees. The team can replace its captain during the competition. Team can have only the fewest possible members beside the field during game play: they will usually be the captain and an assistant team member.

All decisions about scoring, game play and timing are made by the juries. Teams should completely respect their vote and decisions. Members of the jury will be from different fields of the robotic science.

United States military may receive a dog-like robot armed with a sniper rifle.

A new synthetic biomaterial has the potential to repair hearts, muscles, and vocal cords.